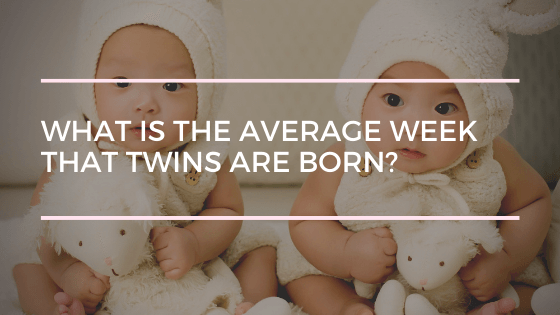 When we found out we were expecting twins, one of the first questions we had was what is the average week that twins are born? You often hear of twins being born early because they’re twins but how early? And also on average, when do twin babies generally come? This post explores a range of topics including:

What is the Average Week Which Twins are Born?

According to people smarter than us, a normal twin pregnancy is due to run to around the 28 to 40 week mark. This is compared to a singleton pregnancy which will normally run to 35 to 42 weeks.

Why Are Twins Born Early?

We’ve written about why twins come early in detail in the past but in summary, twins generally come earlier than singletons for a range of reasons including:

If you’re expecting twins and worried you have early signs of labour or bleeding, contact your health care professional immediately and seek their advice. No question is ever too stupid when it comes to pregnancy.  There’s plenty of support out there from experts who will help educate you on the process based on your unique situation.

What is the Survival Rate of Twins by Week?

Before we discuss the survival rates of twin births, it’s important to note what is the earliest babies can be born. This is known as the ‘age of viability‘ and it’s thought that this at 24 weeks of gestation. A baby born at the 24 weeks mark would require a lot of assistance whether it be through breathing assistance or time in the neonatal intensive care unit (NICU). However with this said, babies can be born earlier however have a lower chance of sruvival and higher chance of death.

According to the American Journal of Epidemiology, twins born between the 29 week and onwards have a lower risk of perinatal, neonatal and infant mortality. After the 29 week mark, the chances of developing perinatal and neonatal issues while being at risk of infant mortality is drastically reduced as the weeks go on.

While according to the Quint Boenker Preemie Survival Foundation, the below provides a view on the likelihood of survival by weeks: What are the Complications that can Occur with a Twin Pregnancy?

According to the experts, having a twin pregnancy you have a heightened risk of complications compared to a singleton pregnancy. No surprise when you’re carrying two rather than one! Generally some of these complications include:

Like we mentioned earlier in the post, if you’re worried with what you’re reading with the above, we recommend you consult your medical professional who is familiar with your unique situation and can provide advice based on your situation. From our experience, they will recommend different strategies if they detect any of the above whether it be more scans, recommending you to stop working and keep your feet up or even recommending an early birth. As we said, consult your medical professional who is best informed to help you here.

We hope you’ve enjoyed this post on exploring the average week that twins are born. Generally from what we found, twin pregnancies are born between the 28 to 40 week on average. While the survival rate goes above 50% after you reach the 25 week mark. The longer time goes on the more this reduces your chances of pregnancy complications.